My strangest day in advertising - a trip to Bogota 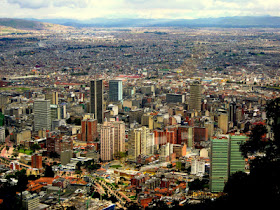 A lifetime in advertising has brought quite a few bizarre meetings and the odd surreal day but probably my strangest one happened in 1994 when I ended up going on a business trip to Bogota in Colombia.

I was running my own agency in Soho, London. We had grown quickly to about 50 people in three or four years and business was good. Just after Christmas one of our copywriters came to see me and explained that her father, who was CEO of a large Italian Bank, had been meeting with his friend and CEO of the South American division at their home in Milan over the holiday; the conversation had turned to difficulties they were having getting the right advertising in the Colombian market and when he heard his friend's daughter worked for an agency, he wanted the boss of that agency to come to Bogota and give them an opinion.

Now one goes on quite a few wild goose chases in search of business in the ad industry and that's immediately how I categorised this one. "Well, yes that's all very interesting," I said fobbing her off, "But I know less than nothing about the Colombian market and we are up to our eyeballs here and I doubt whether he was being serious". On hearing my response, she looked so crestfallen,  by way of consolation I added, "Well if he wants to pay for the whole trip I would be happy to meet up with him and give my opinion".  And that I was confident was the last I would ever hear of that...... or so I thought, until two weeks later when she walked in to my office and triumphantly asked, "Can you go to Bogota next week, they want to book your ticket?".

So that's how I found myself buckled in to a first class seat coming in to land at the world's second highest city and, in 1994, the world's number one kidnapping capital. I was jet lagged and it was nearing midnight, and I was girding my loins for the usual tedium of immigration and customs before I would get a taxi to my hotel. As I stepped off the plane on to the gate I was immediately greeted by three swarthy gentlemen, "Signor Beeching?" one asked. I nodded in bemused fashion. "Please follow us, we are here to escort you to your hotel. Your luggage is taken care of".

I never saw the luggage carousel, I never saw customs, I never even saw passport control but what I did see, only about ninety seconds later, were two huge American black SUV's waiting by the kerb side as we exited the airport. We climbed in to the first one and started speeding towards the city at a breakneck pace with the other SUV following inches behind us. It was all happening so quickly that belatedly it dawned on me, these chiselled looking men were bodyguards and all armed.

Forty five minutes later we swept through a set of impressive wrought iron gates and I could see the sign 'Country Club de Bogota'. This was to be my hotel and on alighting from the car I was greeted by the hotel manager, "Welcome Signor Beeching, let me take you to the Presidential Suite". I turned round to say thank you to the bodyguards but they had already gone. "They will be back to pick you up at 11.00 am tomorrow Signor," he added.

How can I describe the sumptuous, sybaritic luxury of the Bogota Country Club and the size of my Presidential Suite. Well quite simply it knocked anything I had seen in Paris, London or New York in to a cocked hat and if I'd wanted to invite a hundred people to my room for a party, they could all have come 'plus one' and I still would have had room to accommodate them.

Apart from the somewhat disconcerting altitude sickness I felt as I got out of bed the next morning, I was suited, booted and ready to go and pronounce my opinions on the world of Colombian bank advertising. I wasn't totally winging it as I had worked on the Barclays Bank advertising account for many years in the 80's.

I was picked up at 11.00 am on the dot and exactly thirty minutes later I was in front of an imposing modern office block in downtown Bogota. After having gone through airport-like security in the lobby I arrived on the top floor of the bank and the office of Gianfranco Zanetti (not his real name, you'll see why) where I was met by further security – an airtight lock where the door in front didn't open until the one behind had closed and I'd been scanned one more time. On the other side stood a middle aged lady in a smart grey business suit, "I am Signor Zanetti's personal assistant, he is waiting for you, please follow me".

I walked in to an office which contained the largest desk I'd have ever seen and sitting on the other side of this rainforest of dark polished wood was a small immaculately dressed man aged about sixty, whom I was sure was wearing a hairpiece.

"Buon Giorno, Filippo", he said rising from his seat and embracing me like a long lost brother, "I have heard much things about you", he continued in faltering English and a strong accent. What he had heard about me and from whom I had no idea.

"Please sit, but first before we can discuss the business I must ask of you one thing molto importante. When were you born and what time?"

I was confused, what had my date of birth got to do with anything but not wanting to appear rude I replied, "June 28th 1959 but I'm terribly sorry I have no idea what time of day."

"The time of day is molto importante, it's possible you can ring your Madre", he said thrusting the phone towards me. Subserviently I held the phone up to my ear and dialled the number in Cheltenham.

"Hello dear, is everything alright? It's very early"

"What a strange question dear. I have no idea, remember there are four of you. Is the weather nice in Bognor dear?

"Three in the morning. Thanks Mum, I'll call you at the weekend".

Gianfranco gave a satisfied smile and informed me that he would ring his astrologer in Rome with this information, the necessary astrological charts would be drawn up and we would find out whether it was auspicious for us to do business together but we wouldn't get an answer until the next day.

Several questions rushed through my mind, such as why couldn't we have done this before I came all the way to Bogota, what if our stars weren't aligned (or whatever they needed to be) and was I a Cancer or a Capricorn?"

"Allora, we can no speak of the business today, let us go to the revolting restaurant and meet Doris for lunch", said Gianfranco beaming at me happily.

Minutes later, we were speeding across the city in a convoy of three cars; Gianfranco required an additional SUV in front as well as the one behind and also several more mean looking bodyguards than I'd been allocated at the airport.

As we stepped out of the lift in to the restuarant, a 360 degree view of Bogota opened up before me and the penny dropped - this was not a 'revolting' restuaurant but a 'revolving' restaurant.  A particularly obsequious maitre'd showed us to our table, our bodyguards took up their station on the next table and we waited for Doris.

We didn't have to wait long. As I followed the direction of the swivelling heads and the ogling eyes of the male diners, I spotted a latino Jessica Rabbit with pneumatic figure and a dress to show it off squeezing her way through the tables towards us and positively oozing sex appeal. This was like no Doris I had ever met before and I was later to learn that this was in fact Gianfranco's mistress in Bogota whilst his wife and family were safely ensconced back in Italy.

The lunch was a long one and disconcertingly Gianfranco nibbled at Doris's ear throughout; she spoke no English but she was rewarding enough to just to observe. Eventually I was delivered back to the Bogota Country Club and later that evening as I sat on the terrace overlooking the artificial lake and pink flamingos (yes seriously), nursing my Chivas, I wondered what the next day held in store and whether it would simply be a trip back to the airport if my Jupiter wasn't aligned in Gianfranco's Mars.

The next morning I waited on the steps of the hotel for my escorts to arrive and take me back to the bank. Three SUV's swept up to the front of the hotel and to my surprise out of the middle one climbed down the diminutive Gianfranco. He was dressed in full riding gear: the shiniest knee length boots, the whitest jodhpurs, an impeccably tailored black riding coat and a pink cravate. He was excited, "Tutto e molto bene. We have very good news from Roma, everything is perfetto for us. It is very correct that we should do the business together but we have plenty time for this, now we go to school".

The indoor air conditioned riding school was part of the Bogota Country Club estate and equally luxurious. I sat in a deep leather seat in the bar, sipping my cappuccino in front of a giant plate glass window which looked down on to the riding school twenty feet below and Gianfranco, who waved up at me. I waved back thinking he must be quite an accomplished horseman and I was in for an exhibition of riding skills. My expectancy was further heightened by a large and beautiful looking steed being brought out by a groom in to the middle of the school. A box was positioned to help Gianfranco scale his mount and he proceeded to climb in to the saddle somewhat awkwardly and with assistance from the groom.

How best to describe Gianfranco's riding style on the one and only circuit he completed of the school before dismounting? Imagine an epileptic rag doll bouncing on top of the horse and that will begin to give you some idea. Minutes later he joined me in the bar.

"Ah Filippo, I was magnifico, no?".  "Magnifico', I replied in all honesty.

"I only have cinque lezioni but they tell me I have, how you say in English, natural talent. Allora let us now start to talk the business".

Over the next eighteen months I was travel to Colombia many times and to grow very fond of the eccentric Gianfranco and the Colombian people I met, who were warm spirited and generous natured. Eventually I was to find out quite a bit about the Colombian banking market and consumer and we went on to create two highly successful TV campaigns for the bank which we shot in Spain. I once asked other executives I got to know at the bank whether all the security was really necessary and then they showed me the video of the previous president sitting in his vest on the floor of a squalid room, holding up a copy of El Tiempo in front of him and that told me all I needed to know.

The many Colombian stamps in my passport were to lead to me being arrested for drug smuggling in Cuba a couple of years later but that's another story...

(Although it's nearly twenty years ago, I have left out real surnames or the name of the bank to avoid any embarrassment for anyone but Gianfranco and Doris were their real christian names).